by NewsReporter
in Manchester

MANCHESTER, NH – The daughter of a disabled woman being evicted from her apartment of 15 years has opened a GoFundMe page to help pay for her mom’s relocation costs, including the required upfront first month’s rent and security deposit.

Luna resides in a third-floor apartment at 221 Wilson St., her home since 2007. The tenement, built in 1880, is rundown and in need of extensive repairs. She has had three different landlords over the 15 years she’s lived there but the last two have used the same manager.

Last March, the new owner – Reagent 4 Slip LP, with its main office in Boston, Mass., and another in Newport — started eviction proceedings against Luna and several other tenants.  Luna, with the help of Elliott Berry, managing attorney of the Manchester office of NH Legal Assistant and director of its Housing Justice Project, was able to stave off eviction until this April 3.

Luna is up-to-date in her rental payments.  She is being evicted because the new owner wants to renovate the rundown building and says he can’t do that without her vacating the premises.   Berry said he made a case in court for that necessity.

Reagent paid $793,000 last March for two buildings – 215 and 221 Wilson St. – on a combined property, according to the city’s online assessor’s database.  Manchester Ink Link tried to reach Mark Jacob Daniels, the registered agent and manager of the company, for comment but received no response.

Berry said landlords are allowed to evict tenants, including those who have paid their rent in full, to make renovations that cannot be done without the unit being unoccupied.  There is no requirement for the apartment to be inspected later to confirm renovations were done.

Jessica Margeson, tenant organizer with the Granite State Organizing Project, has been working with Luna for the past two years. She said in the “Live Free or Die” state, homeowners can decide what they want to do with their property.

So in the midst of a housing crunch – there is only a 1 percent vacancy rate, according to Berry – and where there is a surge in sales of apartment buildings – tenants are being evicted because the new owners want to renovate the building.

Margeson and Luna call it a loophole, one they say landlords are exploiting, while Berry questions whether some landlords are using it as a pretext to get rid of tenants.

Margeson said the many “dilapidated, naturally occurring affordable houses” in the city are falling prey to “investors coming through, swooping them up and quickly trying to do renovation evictions making many of our Manchester residents homeless quickly.”

Currently, she said, the majority of evictions being processed through Circuit Court are renovations evictions.

Those evictions, Margeson said, have led to an eight-plus week waitlist for hotels and a waitlist as well for the city’s shelters.

Luna, anticipating that her landlord would ultimately be victorious in evicting her, has been searching for an affordable apartment for months.  It needs to accommodate not only herself but her 19-year-old son Nathan, who is still in high school, her father, Walter Hobson, 69, who is disabled and requires oxygen and her fiancé Nicholas Martel, 41, who is also her and her father’s caregiver.

She knew it would be tough finding a place but Luna said she did not realize just how difficult it would be.  “It’s like trying to find a unicorn,” she said.

She said they need a three-bedroom apartment, if her father continues to live with them. He has been approved for assisted living housing, which she said is proving to be just as hard to find as an affordable apartment.

There were few affordable apartments in the city prior to the pandemic and now there are even fewer, Margeson said. Luna pays $870 a month plus utilities for her three-bedroom apartment, which is a bargain but, again, it is rundown.

As the days click by and the eviction date grows closer and still no apartment in sight, Luna is losing hope.

Her anxiety level is rising and she fears she will end up living out of her car.

Luna suffers from a myriad of maladies including asthma, fibromyalgia and neuropathy in her legs and feet, which sometimes numbs her extremities making it difficult to go up and down stairs.  As a result, she is searching for a first-floor apartment.

She said they are looking for a two- to three-bedroom apartment, with a washer-dryer hookup.  If her dad finds housing, then they will only need a two-bedroom, she said.  They can afford about $1,500 a month or up to $1,700 if utilities are included.

Martel said the first weekend in March he went to view an apartment that fit their needs and 15 to 20 people were already there.  He knew that it was likely one of the other apartment seekers would get the apartment since he and Luna are struggling to come up with the first month’s rent, plus security, plus application fees.

They have been approved for rental assistance through the New Hampshire Emergency Rental Assistance Program but, Luna said, it will take about six weeks to get a check after securing an apartment.

Landlords, Margeson said, also are allowed to charge late fees of $5 a day until they receive payment.  Not surprisingly, property owners are selecting those individuals who can pay the upfront costs immediately.

Thus the need for the GoFundMe page. 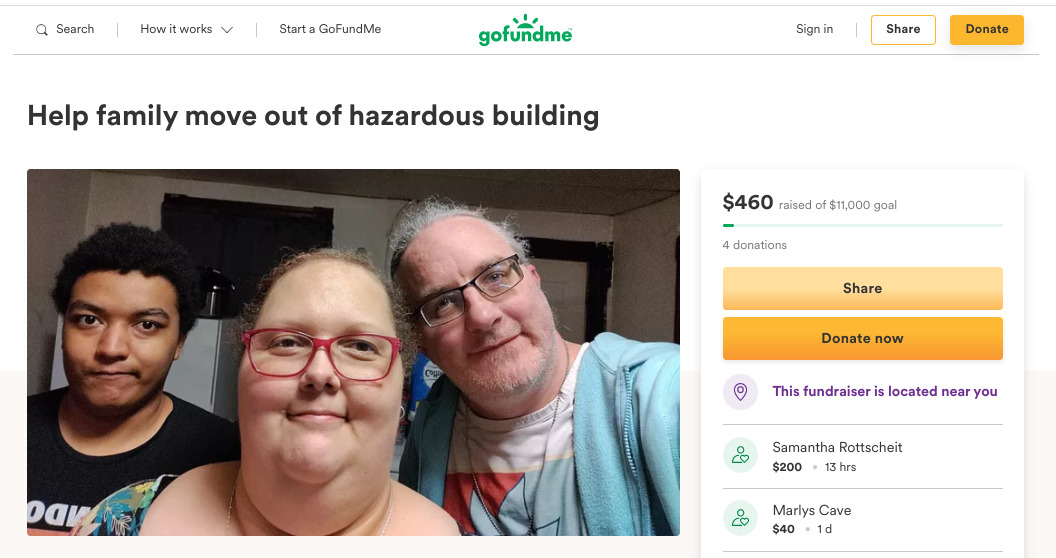 Because the family has been subjected to roach and bed bug infestations repeatedly over the years, Luna said they also must replace a lot of furnishings, something they have had to continuously do over the years.   They don’t want to infest a new place, she said, although she said the building hasn’t had a bed bug infestation in years and the roach problem has been resolved.

The money raised also will be used to cover moving costs.

Another major problem in procuring an apartment, she said, is some landlords are requiring a tenant’s monthly income to be three times the rent.  So, if the rent is $1,500 a month, a tenant would have to have an income of $4,500 a month or $54,000 a year.

They also have to come up with the cash to cover application fees.  Landlords are charging anywhere from $35 to $75 per person to cover the cost of credit and background costs.     Luna said one landlord was charging $150 per person.

While her son is still in high school, because he is 19, he is considered an adult and the fee applies to him as well.  Those fees, she said, are non-refundable.

Lozeau said her agency could help with the security deposit, application fees and other costs.  She said so far SNHS has paid out $60 million of the $110 million allocated for the state to help people with rental issues.  Currently, 13,000 households have been helped with the average assistance totaling $8,053.

She said property sales and increasing rental costs are “absolutely” fueled by the pandemic.

Lozeau said people are coming from other states to live in New Hampshire, in part, because they can work remotely.  No longer do they have to live in Boston or New York City or some other busy area.  And that, she said, has had an impact on affordable housing and is “what is driving this market.”

She said that there are landlords who are “unsung heroes,” maintaining affordable housing to the best of their ability.  Some haven’t raised rents for a long time because they know their tenants and are trying to help them.

“They’re pretty remarkable and there are a fair amount of them,” she said.

Then there are others, she said, that know being a landlord is a lot of work and that in this market they can make a lot of money.

She said before the pandemic, there wasn’t enough affordable housing.

“I think the change we’re seeing is all the properties are worth much more than they were years ago,” she said.  “You’re balancing the rights of property owners against the rights of people who live there.  It’s a really difficult thing because you can understand both sides of it.  Like the 70-year-old landlord who says ‘I just can’t do this anymore and I can really retire and be OK and pay off what I owe.” And you say, ‘I don’t blame you.  I understand.’”

On the other hand, she said, is the question of what is going to happen to the tenants.  “The owner you sold it to doesn’t want them. It’s a really difficult thing.  Should we be able to say to that new owner you have to serve this population?”

At the end of the day, she said, the tragedy is “where are they going.”

She said the only way she knows how to assure affordable housing is by using public dollars to build it or renovate buildings and have strings attached to it, that is, requiring a certain number of the units to be rented at an affordable rate for a specified amount of time.